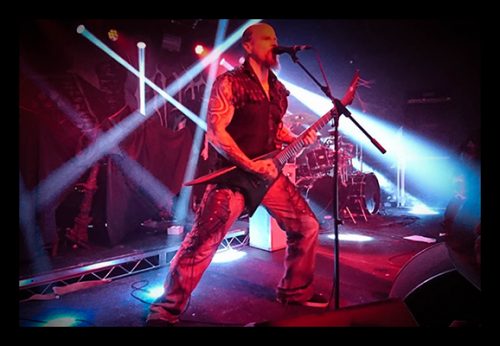 There’s a little legend about Finnish bands bringing the brutal weather with them when they perform their Southern Californian debuts. It happened with Wintersun‘s debut in 2012 and with too many others to count. Tonight would be no exception. Not only did WOLFHEART bring their Winter Metal to the City of Angels, they brought actual winter as well. There is no other explanation as to why there was thunder, lightning, and a full blown storm outside in the middle of October.

As the band was setting up, people were also making their way to the stage. Wolfheart has had a cult following for a while around here and for those who have not had the chance to see them abroad, it would be a new experience, a breath of (cold) fresh air. There were people who have followed the band’s frontman Tuomas Saukkonen throughout his trajectory since Before The Dawn, Black Sun Aeon, or before, and there were also some Wolfheart newbies, who would soon be converted and welcomed to the pack.

Red lights indicated it was almost time. Then acoustic intro began, which ended up being ‘Everlasting Fall’, the opening track of their latest album ‘Constellation Of The Black Light.’ Great choice to kick off the night!

By the time the second song came on, everyone was warmed up and ready to party. Not surprisingly, people knew the lyrics and were singing along – “The aeon of cold, frozen to the core, white veil upon the earth!” This was ‘Aeon Of Cold‘ off the band’s second album ‘Shadow World‘. The band was headbanging along with the audience and spraying with their freshly-wetted locks. Suddenly it was raining inside too! The band’s guitarist Mika Lammassaari stole the show (for this song) when it was time to play his solo. The already amazing solo was taken to heaven levels.

After the gloriousness that just occurred, it was time for a few words from the frontman himself. He talked about playing winter metal in a warm country and it still being hot on stage. Small pits formed for the third song, which was ‘Zero Gravity‘, once again from ‘Shadow World’. The lyrics for this one were also known, as the crowd, word for word, sang with Saukkonen and clapped along.

During the intro for ‘The Hunt‘, the opening track of their debut album ‘Winterborn‘, Lammassaari took the opportunity to cheer on the crowd and encouraged them to chant along. Being the first Wolfheart song many people heard, it’s one of those really special songs that are always amazing to experience live. Small pits formed for this song as well, as the rest of the crowd headbanged and sang along.

More words from Saukkonen. This time he was commenting on the small size of the pit. A ‘one man circle pit’ is what he called it and requested for more people to join in. Of course people obeyed.

‘Breakwater‘, another new one and the fastest song of the night would follow. Whistles from crowd in anticipation warmed everyone up for what was about to happen – about half the venue circle pit.

The last song began with a slow intro. The band standing completely still on stage while crowd roared in excitement. Especially after that huge circle pit. ‘Routa Pt. 2‘ is another really known one from the first album.

The band exited the stage with a melancholic outro. No encore no goodbyes.

Interview with Tuomas Saukkonen after the show!