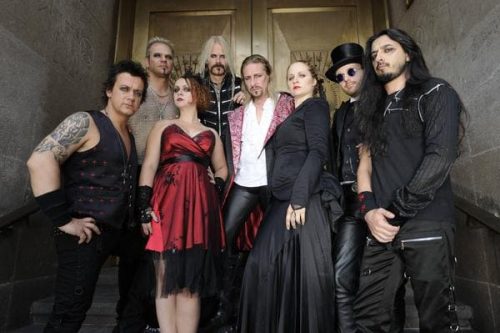 Symphonic metal pioneers THERION unveiled the plot and first track off their opulent opera project »Beloved Antichrist« last year, which will see the light of day on February 9th. Today the band is kicking off the new year by presenting another digital single, ‘Night Reborn‘. This uptempo track from the opera’s second act melds typical THERION metal riffs with symphonic grandeur and gives fans another taste of the three-hour-long drama composed by band leader Christofer Johnsson.

Christofer explains:
“‘Night Reborn’ is also one of the more guitar driven scenes in the opera and represents the heavier side of it.
In the previous two scenes in Chapter 11, a mystic from the east (Apollonius) arrives to assist Antichrist (Seth). In this scene he shows the crowd some of his miracles.

ACT 2, Chapter 11, Scene 3:
On the top step outside the gate Apollonius raises his hands, causing Seth to levitate higher and higher.
Then Apollonius lowers his arms and Seth slowly returns to the ground. Seth lifts Apollonius’ hand towards the sky and proclaims his name. The crowd cheers.”

Stream or download ‘Night Reborn‘ via this link: http://nblast.de/TherionNightReborn