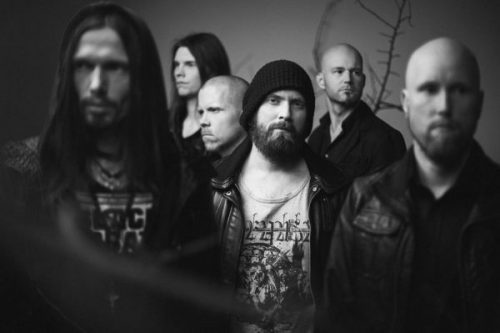 Finnish doom betal band SWALLOW THE SUN announced Juho Räihä as their official second guitarist. This announcement follows the recent departure of their long term guitarist Markus Jämsen. The news was posted via the band’s official official Facebook page, and you can read it below:

Hi all. We are very happy to tell you that our good friend and amazing guitarist Juho Räihä will be an official member of Swallow the Sun from this day on as our second guitarist.

As many of you know, Juho has been playing and touring with us for the last couple of years already, and during that time we have become close friends and that is the most important part of this all foremost. But as Juho is also an incredible guitarist and one of the nicest guys you can imagine, this was the most natural step to take for us after Markus decided to step aside from the band. So, please welcome Juho Räihä to the Swallow the Sun family with a big bang!!

Here is few words from Juho:

“I’m honoured to be asked to join Swallow the Sun as a full time member and I’ll be participating in the future albums as well as live shows. During the past couple of years that I have been filling in on guitar, and at times mixing live shows, The STS guys and I have gelled with each other on a musical- as well as on a personal level.

I have also been playing with Juha in Hallatar, which has only deepened my respect for Juha’s and STS’s music and made it clear to me that this is where I need to be.

Even though I’m bummed about my friend Markus Jämsen leaving the band, it seems a logical, and a welcome step for me and the band to stay on the same mutual path. Last but not least, thanks to all of the fans who expressed their support and were rooting for me after Jämsen’s decision was made public.

Thank you again, and see you at the shows!”

On May 7th, 2018, the band announced the departure of their original second guitarist, Markus Jämsen, via their official Facebook page. The statement read as follows:

Markus “Jämy” Jämsen to step aside from Swallow the Sun.

We are ultimately sad to tell that our brother and guitarist Markus has decided to quit playing in Swallow the Sun.
17 years we have played together and made albums, and that is a lifetime among the bands these days. Hell, people even get married and divorce 5 times during that time these days. We LOVE and thank you Jämy for all these years full of laughter, memories, touring the world and pulling through the light and the dark together.
But you will always be one of us, now and in future, so there is no escaping of this line of blood brothers you old bat.

We will shed some light for the future of the band hopefully soon, until then take care and show some love and respect for the one and only lead guitarist, the high tower and statue of liberty of Äänekoski. All hail Jämy, see you soon brother!!

“Dear all, I have decided to step down as a guitar player from Swallow the Sun. There is couple of reasons why I came to this conclusion. Some of you are aware of the state of my hearing and the worry that I carry causing futher damage to my ears. A few years ago at my parents summer cottage I noticed that the hiss, which I’ve had for a while didn´t stop anymore but kept going. I thought that couple of days surrounded by nothing but silence, would renew my ears and that my hearing would be back to normal again. Well..it didn´t happen. Now concerning this, I do not dare to take the risk of developing tinnitus as my ears propably could not handle the heavy touring anymore with the next Swallow the Sun album.

Another thing is motivation. Going on tours has become increasingly difficult every year, which is quite contradictory to how much fun it has been in the end. Going onto the stage and playing music you love is after all the best thing that there can be. But now I could use the phrase “my glass is full”.

I´ve been in this band for 17 years. It´s a pretty darn long time,
especially when you think about what kind of “full-on pultsari mode” it has been every now and then. Lots of laughter, sometimes tears.. Spending time together in a tour bus, listening good music and cleaning the air in the best company around.

I would like to thank all the fans, bands and partners whom which I have come across and got to know during these years. Special thanks to my bandmates: Juha, Mikko, Matti, Aleksi, Juuso, Kai, Pasi, and guys behind the band: Mikko T, Jarno, Jukka P, Juha R, Matti K and Toni. Love u guys!”

Räihä has also been part of Swallow The Sun’s mainman Juha Raivio’s other project HALLATAR, along with Tomi Joutsen and Gas Lipstick.
ShareTweet