Swallow the Sun – When A Shadow Is Forced Into The Light 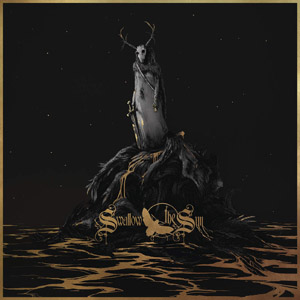 It was a bit difficult for me to listen to this album with a critical ear. Swallow the Sun (along with Trees of Eternity and Hallatar) have a deep personal meaning to me and I wanted to simply wrap myself up in the entire album and be content. But here goes…
I listened to the album as a whole, focusing on the music, but also taking the lyrical themes into account at times. It could be possible to analyze each song separately but I felt that there was a distinct beginning, middle and end, at least in the music. The songs all tied in to each other as well, lyrically and musically, so I found it hard to separate them. As I listened, I also kept in mind“Lumina Aurea”, the 14 minute stand-alone single they released in December. I’m not entirely sure it was meant to be related to the album but as I was listening to “Lumina Aurea” I felt some parts were giving a glimpse of what could be expected on When A Shadows is Forced into the Light.

We begin with title track, an unexpectedly bright and somewhat uplifting melody. The intro emits an almost proggy vibe, somehow heavy and light at the same time. The lyrics combined with the music seem to provide an introduction to the album, reminiscent of a narrator beginning a story. There is also a bit of foreshadowing in the song as well, alluding to sounds and lyric themes found later on in the album (firelight, crowns, stars, wings, clouds). As the song progresses, we regress back into the darker, heavier realm more familiar to StS music, as if the prologue is ending and we’re getting close to the beginning of the actual story. This leads well into “The Crimson Crown”.

To me, the ambient sounds and music in the beginning of the song tie into “Lumina Aurea”. The atmosphere the first song lacked comes in full. This is where the story begins. There is a combination of the unfamiliar uplifting melody seemingly carried over from the previous song and the familiar gloom we’ve come to know and love from StS. The lyrics paint a quite vivid picture, complete with lots of colors (crimson, golden, silver, white…etc.) but jogs my imagination, what could it mean if its all metaphorical? And then the white swan and Bridge of Stars are mentioned as well as the nightingale. At least the significance of this imagery is not lost on me.

“Firelight” brings the solid melancholy that was still not completely graspable in the first few songs. However, the flow of the lyrics seem a bit scattered as well as repetitive, which is probably why it has been the song getting stuck in my head most often. The chorus is catchy, but I feel like this is one of the weaker songs on the album, as if there isn’t as much substance, at least not by StS standards.

From the weak point, straight to the top. The album takes a turn with “Upon the Water”. Here I found the substance and the distinguishable StS atmosphere and vehemence I had been craving that didn’t quite come through with the other songs. I could feel this song in some tangible part of me, which was something I had been anticipating since I learned of the albums release. “Lumina Aurea” subtly hinted at a very rich, epic sound to come, like something big and menacing lurking in the shadows, and I feel it finally starts showing its face here. This is the climax of the story.

“Stone Wings” was the calm after the storm. Or maybe a side story, a deeper look into a character from the story we haven’t been focusing on. It took me more than one listen to truly get engulfed…one of those songs thats best appreciated at full volume, only then it will command your full attention. I felt like I got lost during the verses and was brought back when the chorus began again. The lyrics in this song don’t follow the theme of painting a vivid picture as closely as the other songs, they’re more straight forward, seemingly written more to portray emotion rather than imagery. This song also produces the rich epic sound “Lumina Aurea” foreshadowed. However, I’m not completely convinced the guest vocals were placed well. It felt a bit inorganic, though the harmonizing definitely fit and complimented the song and possibly the entire album.

Parts of “Clouds on Your Side” reminded me a bit of the band Antimatter, and as the song progressed I could hear Juha Raivio’s distinct sound so clearly it was as if I was standing right in front of him watching him play. I know he is familiar with the music of Mick Moss and Antimatter as well so this made perfect sense. This is possibly my favorite song off the album. Its a perfect mixture of a familiar StS sound, with new elements and parts that entwine with the sound more reminiscent of Trees of Eternity and Hallatar that I identify so strongly with. Again, I’m curious about the guest vocals and the relevance of the use of French. This was another song I could feel.

“Here on the Black Earth” sounds like we’re coming to the end of the story. It combines the familar StS melancholy and deep heaviness, with an echo of the proggy sound from the beginning of the album as well as a touch of a new, more heavy metal sound not heard yet on this album and not so common to StS.

“Never Left” is a proper outro. The music seems to be wrapping up all the places we were taken through out the album, and the lyrics provide an obvious sense of leaving, an ending, going forward in time without the listener or whomever the music was meant for. Again I heard ghosts of Trees of Eternity/Hallatar mixed in with the familiar StS sound and something, yet again, new that didn’t sound out of place.

There is a lot of vivid imagery in the lyrics for this album. Lots of contrasting ideas; light and dark, sound and silence, life and death, healing and suffering. Imagery of colorful scenes and deep monochrome darkness. All equally portrayed in beauty. The nature related themes seem a bit more abstract and metaphorical than from the last album, Songs from the North. Though the lyrical theme is quite repetitive through out the album, I think each song kind of explores the similar themes from a different angle, which creates a single vivid yet abstract image with lots of details and varying perspectives. As the album progresses we go from a powerful bright, uplifting, almost encouraging sound and lyrical theme then gently float back down to the heavy dark melancholy we’ve come to know and love of StS. I can’t help but compare the sounds (and some lyrics) to that of Hallatar and Trees of Eternity. These other bands have a very deep personal relevance to me so I am a bit biased and have a keen ear on when I hear sounds and lyrics that meander through out all three bands .  The title of the album itself, can be found within Trees of Eternity lyrics (which, I cannot now unhear every time I read the title) . It seems there is a common beacon that shines through the sound and themes of all three bands that is undoubtedly an ode to Aleah Stanbridge’s memory.

Illuminates the paradoxes of life (and death) both musically and lyrically...

When A Shadow Is Forced Into The Light takes us through lyrical and sonic antitheses; light and dark, sound and silence, life and death, healing and suffering, which creates a single vivid yet abstract image compiled by many details and varying perspectives. It evolves from an unexpected brightness that is simultaneously both light and heavy, and descends gracefully into the deep melancholic depths where Swallow the Sun’s sound is most commonly found.