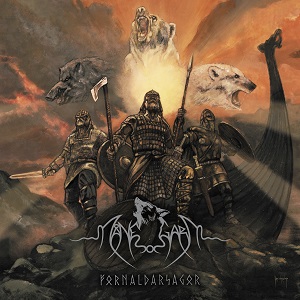 After more than 3 years of work, the trio of Månegarm invites us to go back in time with a new album, “Fornaldarsagor” (released on April 26, 2019 – Napalm Records).

“Sveablotet” plunges us right away into the heart of the matter. This is a themed album because each song is inspired by Ancient Sagas, hence the name of the album, which combines myths, legends and history. Far from being “copy-pasted”, the texts were all written by Jakob Hallegren (Månegarm’s drummer and an history teacher), after serious and long research.

This is called “being in line” with a band since I just finished reading “The Icelandic Sagas” as well as the “Edda” a few years ago.

From the “Völsunga Saga” to “Krákumál” passing the bloody battle of Bråvalla, you will know (almost) all about the Old Times.

Despite the emergence of a multitude of bands in the same style in recent years, Månegarm is immediately recognizable. Skilfully mixing fast riffs, heavier riffs, then touches of black metal without forgetting the usual acoustic title, they have been going on for over 20 years without tiring us or losing their creativity. Why change a recipe that works ?

We feel that this album is sincere, as if they had lived each song.

And obviously we recognize the voice of Erik Grawsiö who delighted us with the mastery of several styles of songs, from the growl to a more melodic voice, especially on the last title, “Dödskvädet“. Finally, we can appreciate the beautiful voice of Ellinor Videfors, already present on the album “Månegarm“.

Although each title has its own illustration (by Kris Verwimp), the artwork of the album, which represents among others a wild boar, a wolf and a polar bear, can also illustrate “Tvenne Drömmar” (which sounds a bit like Finntroll I think.). Here is an extract from the lyrics :

“In the dream I saw, three great shapes

Angered bears and a furious boar

Slaying our people, as our kingdom was set ablaze

With wide ships and packs of wolves

Slaying our people, though our kingdom was set ablaze”

You can read the detailed explanations of the songs and their translations here : Fornaldarsagor

And if you don’t have enough, Månegarm offers us two bonus tracks (available only in the limited deluxe box set), a cover of Motörhead, “(Do not need) Religion” and “Day star – Son of Dawn“, the first song written by Erik Grawsiö in 1996 but never recorded before.

We feel that this album is sincere, as if they had lived each song.

“Fornaldarsagor” is not just about great music but an incredible universe that takes us back in time to learn more about Nordic History and legends.

With more than 20 years of career, Månegarm can still surprise us.

Conclusion :   Musically, we can say that “Fornaldarsagor” is between the two previous albums, “Legions of the North” (2013) and “Månegarm” (2015), except that the lyrics are entirely in Swedish ; which fits better than the theme that makes us want to visit the Nordic lands and learn more about their rich history. This very successful album will undoubtedly convince both new and old fans. It was worth the wait !