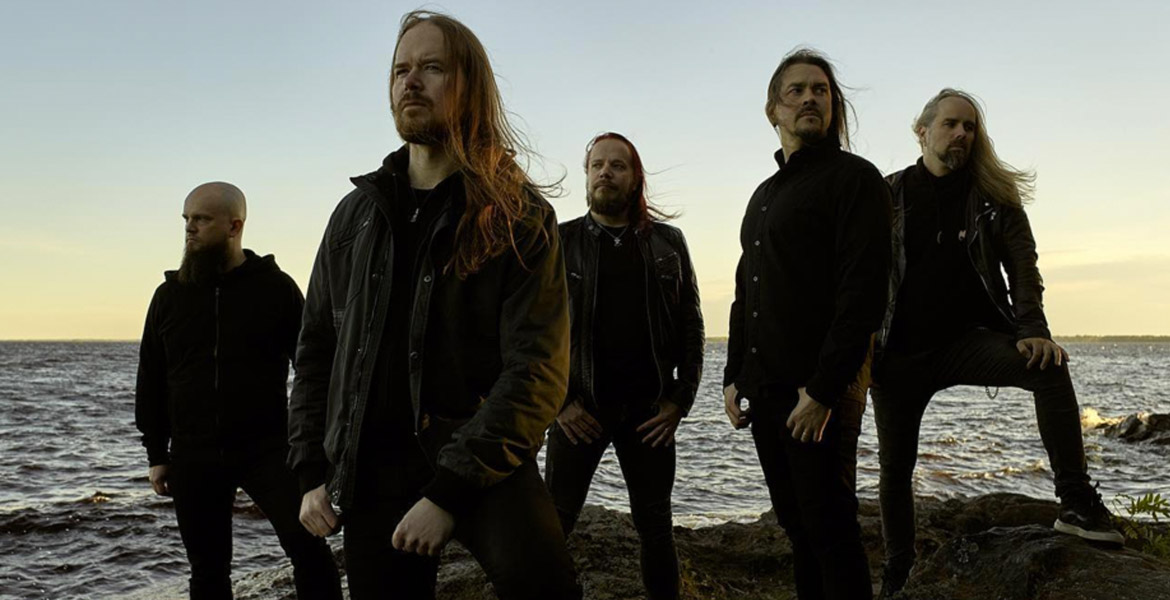 INSOMNIUM is one of those bands that hold a very important place in my heart. Their music, both live and recorded, has carried me through some of the most difficult times. I’ve always looked forward to their albums and have never been disappointed. This time was no different! As soon as I heard about their collaboration with former SENTENCED drummer Vesa Ranta for a photo book inspired by their latest release ‘Heart Like A Grave’, I was intrigued. As an emotive photographer, passionate about Finnish nature, I feel it couldn’t be a more perfect fit. I am a big Sentenced fan and a fan of Ranta’s photo and video work as well, therefore the collaboration was one I welcomed. His involvement in the album’s artwork is also evident.

The band has undergone a slight change in lineup since their previous release ‘Winter’s Gate’, with the permanent addition of guitarist Jani Liimatainen, whom has played with the band live on numerous tours and with other related bands like Omnium Gatherum. Liimatainen’s addition transformed the band into a quintet and the addition of a third guitarist certainly took Insomnium to an all new level.

For their eighth studio album, Insomnium revisited some key elements that had been missed since their previous quintessential releases ‘One For Sorrow’, ‘Across the Dark’, and ‘Above the Weeping World’, while managing to develop a fresh, more epic, more brutal, and more melodic sound. Ranta’s energy also undoubtedly rubbed off during the album’s creation, with nostalgic moments of Sentenced written all over it. The band themselves have stated that the concept for ‘Heart Like A Grave’ is Finnish melancholy, as anyone would expect with Insomnium but I would add that there is also an essence of heartbreak and loss that is more apparent now than previously. Reading through the lyrics, this album is certainly more poetic and that sentiment is accompanied with more epic, more melodic surprises in some songs.

This is the longest album from the band’s catalogue to date, clocking in at 60:56, before the bonus tracks.

The album opens with a somber piano that is recognisably the work of Aleksi Munter, the familiar keyboardist most known for his time in Swallow The Sun. He has worked on previous Insomnium releases so his presence this time around was not unexpected. The first track ‘Wail of the North’ introduces the story of ‘Heart Like A Grave’ by foreshadowing the grief that will be occurring later on. If I had to look at this song from nature’s perspective, I would compare it to the initiation of autumn, when the winds get colder, darkness gets longer and everything on earth begins to die. This introduction to the album is the shortest track of the album, but at just over three minutes long, one can already begin building expectations for what is to come.

After the band’s frontman Niilo Sevänen talks about mourning that unfolds like an open black grave, the album’s intro begins its departure with a melodic guitar solo and ends with a closing version of the opening piano. Before you have time to catch your breath, ‘Valediction’ comes right at you like a hailstorm in July. This was the first song presented off ‘Heart Like A Grave’ and it is completely obvious why this was chosen for not only the first single, but also the first music video. The song itself is classic Insomnium: fast, melodic and aggressive with a slight glimmer of hope. This is also the first part of the three-part series of videos and singles released for this album. As one can expect from an Insomnium video, and one directed by Ranta himself, it is set in a wooden cottage in the forest with the lyrical storyline of the song being completely represented. The opportunity of displaying majestic Finnish landscapes was tastefully taken, broadly widening the audience for this type of video not only to Insomnium and metal fans, but also to fans of nature and landscapes as well. Coincidentally, the release of this song aligned with the announcement of the Amazon rainforest fire. With the chorus talking about black smoke that hides the sky and the world burning tonight, it gave room for the band to be called predictors by some.

‘Neverlast’, the third track off the album takes me back to the band’s ‘Across The Dark’ era. With a title like that and lyrics that talk about life’s impermanence, this song is no doubt a tribute to Sentenced’s ‘Neverlasting’ – another upbeat, catchy song that illustrates our counted days in a more positive light. I can see this song becoming a fan favourite in a live setting because of its catchy chorus and its nice, melodic flow.

The fourth and longest track of ‘Heart Like a Grave‘, clocking in at just under nine minutes is ‘Pale Morning Star‘, which after reading the lyrics I nicknamed ‘Pale Mourning Star’. This was the third single of the album and it was presented alongside a captivating lyric video filled to the brim with Finnish nature – emerald forests, starry skies, auroras, breathtaking sunsets, and everything in between.  The video coincides with the lyrics, music, and the solo around the five-minute mark that was imploring to be unchained, perfectly. The band stated that this is the most ‘Winter’s Gate‘ sounding song on the album. Although I do agree because of the length and journey the song takes the listener on, I also feel a ‘One For Sorrow’ vibe with it. If I’m not mistaking, this is also the first time I’ve read Insomnium lyrics that are so poetic and romanticized – yet they still managed to keep the fierce sorrowful sound they’re most known for.

The story then continues with ‘And Bells They Toll’, probably the most epic work that I’ve ever heard from Insomnium. I joked for a bit that this is the Finnish melodic death metal version of G&R’s classic ‘November Rain’ but more eerie and compact. I still stand by that statement and can completely play out in my head an epic music video complete with a stormy church funeral and a wind-in-hair guitar solo in an abandoned graveyard à la Slash, tied together with a gloomier twist. Being the sucker that I am for big melodic guitars, memorable choruses and piercing words of anguish, it’s not hard for me to admit this is the closest to being my favourite track on the album.

After two epic poetic tracks, Insomnium took things on a more familiar, classic route with ‘The Offering’, ‘Mute Is My Sorrow’, and ‘Twilight Trails’. Musically, these tracks are fast and melodic. Lyrically, I see these three tracks as the reminiscing between the tragedies in the earlier tracks and the album’s ending. These also give me the vibe of the band’s ‘One For Sorrow’/ ‘Across the Dark’ era while keeping things fresh and modern. ‘Twilight Trails’ is a three-part song and it prepares the listener for what is to come next with the album’s title track.

The ninth track is the album’s title track ‘Heart Like a Grave’. This was the second single of the album and was also released via a music video. Within the first few seconds of the video, right after being enthralled with Finland’s nature, I got a chilling feeling of nostalgia for Sentenced. In fact, the whole track is dotted with an enigmatic Sentenced aura that is impossible to overlook. The video does an excellent job at illustrating the story, so I will not give away too much about that here, go watch the video!

Right around the 4:30 mark of the 7:05 minute track, the song takes a nosedive into a progressive realm. Sevänen roaring “Do you still remember?” gives me the type of shivers that anyone who has mourned would relate to and coincides with Sentenced’s spirit. The last minute and a half of the song ends the entire narrative that is the album, with an epic progressive piece from the band’s guitarist Markus Vanhala and closing with a similar acoustic melody to its beginning. The video also has a dramatic ending that gives closure to those who were following along.

Just for fun, I went through the song and Sentenced’s catalogue to compare the similarities I could find. If it interests you, below were my findings, though I’m sure there are a lot more.

Although I feel like the album could have ended with its title track, ‘Karelia’, the final track, is a beautiful 7:50 minute instrumental that brings everything together with a sorrowful solace. ‘Karelia’ revisits a little bit of each song while reminding you that you have reached the final resting point of the whole piece.

Album favourites… As usual, it is impossible for me to choose just one. In fact, with ‘Heart Like A Grave’, there is not one song that I like or dislike more than another, I really enjoyed the album as a whole. However, some tracks I gravitate towards because of specific reasons or moods they have. ‘And Bells They Toll’, ‘Pale Morning Star‘ and the title track I feel are pinnacles of the story, while ‘Valediction’, ‘Neverlast‘,  and ‘Twilight Trails’ will make great live classics. The Sentenced mood is most present in the title track, ‘Neverlast’, and even nestled throughout the album and artwork. ‘Wail of the North’ and ‘Karelia’ are the perfect intro and outro.

For their eighth studio album, Insomnium revisited some key elements that had been missed since some of their previous quintessential releases while managing to develop a fresh, more epic, more brutal, and more melodic sound. Reading through the lyrics, this album is certainly more poetic and that sentiment is accompanied with unexpected surprises in some songs.