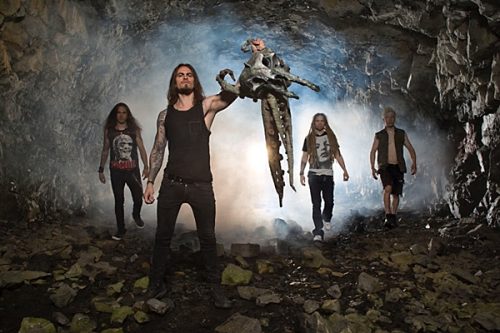 Drummer Oskari Niemi comments: “Playing this song has sent chills down my spine at every show. It feels like glazing a gingerbread house with a firehose. In slow motion.”

“‘Waves’ is our heaviest and most epic song so far. I can barely keep my balance onstage with that humongous riff working its way into my brain like hot lava,” singer Tommy Tuovinen continues.

You can also listen to “Waves” on Spotify.

After two years of working in the shadows, OCEANHOARSE, which consists of familiar faces from the Finnish metal scene, released its debut single and video “The Oceanhoarse” in January. It was a conscious decision to hold up the launch until the band was extremely tight, the song material strong enough, and the band’s own unique voice beginning to take shape. Good songs were canned along the way, if the group felt they didn’t fit or weren’t original enough.

The debut was followed by two sold-out shows in Finland supporting Beast in Black, which led the band to release a live video for their second single “Fading Neons”.

Early on, the members of OCEANHOARSE also set some ground rules for themselves: There would be zero use of backing tracks or synthesizers. The focus would be on kick-ass, live-oriented heavy metal. The band would also have to be number one priority to all of its members, no exceptions.

“It was early December 2016 when I realized that it was time to disband my old group AMORAL and start something new, from scratch,” guitarist Ben Varon says. “And, most importantly, do it with musicians who share my drive and passion for playing music, musicians that would be willing and able to put 130 percent of themselves into this band. The first guy I thought of was bassist Jyri Helko. I called him that very same day.”

It didn’t take long to convince Helko, formerly of FOR THE IMPERIUM, to jump on board.

“The call came at the perfect time,” Jyri says. “Like Ben, I also felt the need to play in a hard-working, tight band that would blow all other groups off the stage. It was an easy decision.”

When it came to finding the right frontman, Varon and Helko had their eyes set on one guy only: ex-MYGRAIN singer Tommy Tuovinen.

“I got excited about the idea right away,” Tommy remembers. “I had had it with bands and projects that went nowhere, so just the attitude alone of these dudes spoke to me. Once I heard the songs they were working on, I knew I needed to be in this band.”

Filling the drum spot was looking tricky for a while. All serious candidates were already involved in multiple bands, and sharing was not an option. But the Gods of Heavy Metal decided to bless the new band with the best-kept secret in Finnish metal: young newcomer Oskari Niemi was found through recommendations of friends, and his attitude and playing blew the guys away. It was clear to all that Oskari was the missing piece. OCEANHOARSE was now complete.