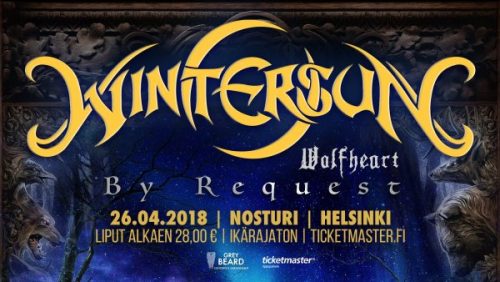 WINTERSUN and WOLFHEART at Nosturi, Helsinki: it was an epic night of enchanting atmospheres, echoes from the forest and heaviness which blasts the ears: that is how I´d personally define the evening.

WOLFHEART had the honor to open the night.

What strikes me the most about this act is that, despite preserving the classic melodic death metal traits depicted so well by bands such as Insomnium and Omnium Gatherum for instance, WOLFHEART adds its own diverse, melancholic and sorrowful yet fierce signature, including raw elements with a hint of doom here and there. Their sound is harmoniously brutal, moving between savage riffs and entrancing and inspiring gentle passages. The hypnotic and atmospheric aspects offer an epic feeling that evokes images of savage Nordic battles, which is amplified by Tuomas Saukkonen´s straightforward growling vocals. Tuomas and Mika Lammassaari’s guitar melodies alternate between mid-paced yet cinematic, to more complex and fast-paced awesomeness. On a final note, I really enjoyed the skills of the immensely talented drummer Waltteri Väyrynen, involved in few bands such as Paradise Lost, Vallenfyre and Abhorrence among others, who replaced the original drummer Joonas Kauppinen for the night.

The headliner of the night, WINTERSUN , played 3 long anticipated “by request” shows in Finland (in Lahti, Helsinki and Kouvola in particular): very special shows indeed since the fans were able to vote the songs played at each show, choosing from any favourite track taken from WINTERSUN´s first three albums. I was quite pleased by the chosen Helsinki setlist because I had a chance to finally hear not only few songs I haven´t witnessed live before but also some of my all time favourites such as “Death and the Healing” and “Battle Against Time“. Epic and hypnotizing melodies, wonderfully masterful vocals together with warm singalongs by the audience are just few of the brilliant elements that could be experienced that evening. Jari Mäenpää, WINTERSUN´s mastermind is, as always, a contagiously inspiring presence on stage and is able to carry the audience´s senses to the next level. The mesmerizing chemistry between the two guitar players, Teemu Mäntysaari and Asim Searah can be easily heard in the beautifully roaring and at times haunting guitar solos. Rolf Pilve from Stratovarius on drums, who was filling in for Kai Hahto, is simply a pleasure to watch and hear blasting away his skills and Jukka Koskinen´s charisma as bass player and backing vocalist is undeniable. Definitely a night to remember. 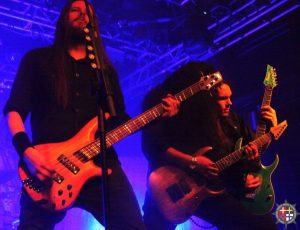