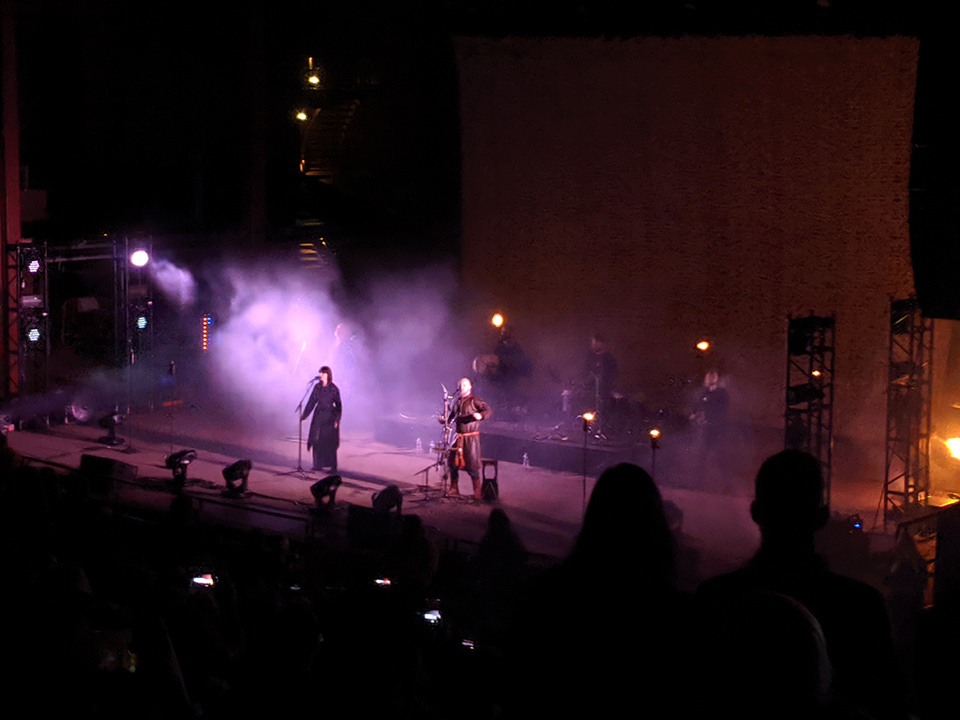 I had the pleasure of seeing Wardruna’s one and only US show for 2019 at Red Rocks Amphitheater just outside of Denver, Colorado on October 17, 2019. If you’re a fan of Wardruna, this is a show you did not want to miss. Many people flew in from out of state to attend what might have been a once-in-a-lifetime experience. I’m lucky and only live about 10 miles away from the famous landmark.

If you haven’t heard of the legendary venue before, Red Rocks is an open-air amphitheater tucked perfectly into a natural rock structure that can seat almost 10,000 people. The surrounding rock faces are not only extremely cool to look at, they provide surprisingly clear acoustics, making it an unforgettable concert venue. It was recently voted the #1 Best Outdoor Music Venue in the US. (check out this drone footage for a better idea of the epic surroundings)

Many of the biggest names in music history have performed there, including The Beatles, Jethro Tull, Jimi Hendrix, The Blues Brothers and Rush, just to name a few. John Lennon himself said that you haven’t really made it as a musician if you haven’t played Red Rocks. I’ve even had the opportunity of performing there as a dancer with the Denver Brass when I was just 11. It’s a hell of a view from that stage.

Red Rocks is also a popular place for locals to exercise, as the amphitheater sports two staircases with about 380 steps from bottom to top – the highest seat sits at 6,435 feet above sea level (or 1,961 meters for the rest of the civilised world). From the top concession area, you can see Denver International Airport over 40 miles (64km) away, sometimes further on a clear day. Performances, both public and private, have been held here for over 100 years.

I couldn’t think of a better place on Earth to hold this kind of concert.

The sun had just set a few minutes before I arrived. The hike from my car to the venue left me out of breath, and I even had to stop and rest at one point. But there were people walking around me that were dressed up in their best Pagan/Viking furs and cloaks, along with plenty of metal shirts and battle jackets. As I entered the venue, I got a glimpse of the shirts at the merch booth, but they were a little pricey for me which is always a downside of larger-scale shows. I made it to the bottom of the amphitheater just as Mari Boine came on stage; fortunately my friends had found a great spot 16 rows up.

Before this show, I had never listened to Mari Boine’s music, so I went in knowing nothing but her name. Mari Boine is a Sami Norwegian musician whose repertoire pertains mostly to ancient Scandinavian traditions. It’s not my typical genre of choice, although several of her songs added a jazzy, rock and roll twist that I really enjoyed. It took a few minutes for me to get into the mood, as with the start of any show, but her music was enchanting and it didn’t take long for me to start swaying with the rhythm.

Based on how many metal logos I saw throughout the crowd on my way in, I had a feeling that many of them were in the same boat as myself. But everyone still managed to bring the cheers that only metalheads can bring after Boine’s songs – enthusiastic and loud. The atmosphere was really positive, and sitting in the middle of these giant rocks under the stars listening to songs dedicated to mother nature was a really unique experience that I don’t think I’ll ever forget.

During her set, I couldn’t help but think she looked like a Scandinavian version of a Janis Joplin / Stevie Nicks mashup, which is absolutely a compliment. I think both of those legendary musicians would have really enjoyed this concert, too.

Mari Boine and her fellow musicians left the stage with many thanks, in English and what I’m assuming was her native Sami language.

Between sets, the lights came up so everyone could visit and replenish their drinks. I got to take a better look at the huge crowd in the rows behind me, there were only a handful of white t-shirts in a sea of black, metal logo shirts, furs and cloaks. I think it’s safe to say the majority of people there were fellow metalheads.

After taking some time to visit other friends that were there, I heard a low rumbling from the stage so I hurried back to my seat. Only to wait around for almost 30 more minutes, even though the stage appeared to be ready for Wardruna for some time before that. The wait felt annoyingly long, but maybe I’m spoiled by shorter times at smaller venues built for only about 1000 people.

I wondered if they were allowing Mari Boine to finish their signing at the merch tent. I had seen a sign when I was walking in that there was a signing from 8:00 to 8:30. Their set had ended with a few minutes to spare before 8.

Closer to 8:40,  the lights finally went down, the crowd went up. The anticipation from everyone in the crowd was palpable. This was my first experience seeing Wardruna live so I had no idea what to expect, but I was excited.

The atmospheric intro to Tyr began and a spotlight appeared on two traditionally dressed men in the center of the stage holding giant horn instruments above their heads (I believe they are called lur). It was a simple but extremely cool effect with their shadows behind them on a giant textured backdrop. They blew into the horns and the crowd was instantly hypnotized.

About three or four songs in, a small group of people a couple rows in front of me stood up and started to dance; It wasn’t long before everyone else got up to flow with the music, myself included. Aside from Lindy Fay Hella dancing around the stage, the other musicians were very stationary. I mainly frequent metal shows when the bands I enjoy can make it out to the US, and the majority of them are very high energy and run across the stage to get the crowd going. Wardruna is the complete opposite, but they don’t need to do that. The energy that came through in their music reached me in its own, ethereal way.

I can’t recall how far into the set it was when the moon rose up behind the stage, but that just added to the magic of the entire event. It was stunning. During one song about halfway through, torches around the stage were lit, giving off an earthy, spiritual vibe that was insanely cool.

For the majority of the set, Einar Selvik didn’t say a word. This was another thing that was unusual to me compared to my past concert-going experiences. However, this wasn’t really the kind of show for a lot of talking. It wasn’t until almost the end of the concert when he finally said hello to the crowd. And the crowd gave it everything they had been holding in all night. The cheering went on for what almost felt like a couple minutes. Einar couldn’t even get a word in it was so loud. From where I was sitting, I could see him wiping tears away from his eyes. The excitement and support bellowing from the crowd simply overwhelmed him. It almost made me cry!

When the noise finally died down, Einar was able to express the gratitude he and the other musicians felt to play that night at such an incredible venue. He mentioned that they had one song left, and of course everyone groaned – no one wanted the show to stop! That was when my friends and I decided to take our leave, though. The worst part (and maybe the only negative thing) about Red Rocks is the traffic before and after a show; it can literally take over an hour, sometimes more, to get out of the park if you get stuck.

As I was walking down the hill back to my car, Einar brought Mari Boine out on to the stage where they played Helvegen together. I couldn’t see it, but I could hear the song echoing from the amphitheater out into the surrounding canyon, and it was one of the most haunting and beautiful things I’ve ever heard. I took a short video on my phone as I walked, but it hardly does the sound justice.

According to a source on setlist.fm, they did return to the stage to play Lakur in an encore, but I was already in my car and driving away at that point (I beat the traffic!). I was home before 11pm, so the concert must have ended sometime around 10:30. I suspect that’s probably due to increasing complaints about the noise from homeowners that live close by…

Overall, the concert was a great success. Mari Boine gained at least one new fan, maybe two once I buy an album for my mother this Christmas. Wardruna played a beautiful set, mainly full of their older and more popular songs, including two of my personal favorites, Fehu and Odal.

This was an experience that I won’t forget anytime soon. I’ll definitely be making it a point in the future to see Wardruna next time they come through Denver!