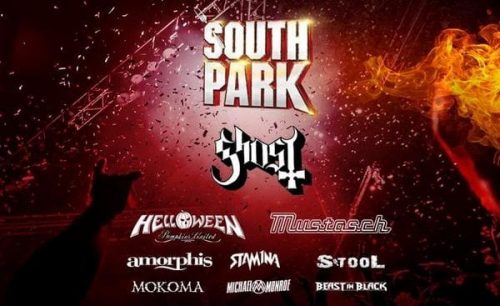 Finland is most likely one of the best country for a metalhead to spend summer in. We literally have festivals that at least feature some metal every weekend + all the clubgigs to make sure all the fans of metal music won’t get bored here. South Park festival that was held in Tampere, Finland had a bit of a bad slot considering the megafestival Rockfest was held at the same time in Hyvinkää and it most likely ate a lot of audience from South Park. But around 14-15k tickets for 2 days sold was pretty good so I think the festival organizers are happy.

They had Ghost headlining on friday but unfortunately I wasn’t there but from what I heard from the festival audience they really blew up the place. Their new materials works live insanely well and people were super stoked about their concert. So I will focus this review on day 2. I wasn’t accredited to the festival so do bare with me for not covering the Day 1.

When we arrived the festival grounds Beast In Black was playing on main stage. In fact I could recognize them already while walking to the area cause of the vocalist Yannis Papadopoulos sound is so incredibly unique. They were most likely around midway of their set when we started watching them. I have a very bad habit of focusing most on drummers and Atte Palokangas was just shining. He not only is an awesome drummer but his way of playing is fun to watch. The band overall played very well together and the vocalist Yannis was simply brilliant. In between songs he was talking to the audience and there seemed to be a big Beast In Black fan somewhere in front row cause to every hint of what they play next this particular person knew it every time 😀 To us as an opener it was a very good one to say the least.

At this point we decided to not head down to the small stage cause next up would be Amorphis on main stage and we kinda wanted to see how their stage would look like. Needless to say it was eyecatching. Of course in festivals you are sort of limited how you can “decorate” your stage but Amorphis had backdrop, sidebanners and the “Ukonvasara” that looks a bit like Thor’s Hammer on both sides of the stage.

Then it was time for Amorphis to take the stage. It was cool to see how the stage was divided when usually you have the drumkit in the middle they had Jan’s drums on left side and on right side was Santeri and his bunch of keyboards. That way they could fill the back area nicely and in the middle were steps the band could use. They started with the new album “Queen Of Time” opener The Bee and from there on it was a combination of older material and material from their latest album. Not sure if Amorphis had noticed that the crowd seemed older than usual so they had some songs from their death metal-era when they played Against Widows from “Elegy” album and The Castaway from “Tales From The 1000 Lakes“. From new album they also played The Golden Elk, Wrong Direction and Daughter Of Hate. How to sum up the concert? Well, one can’t say nothing but praising words about the vocalist Tomi Joutsen. It really seems this guy just gets better and better. The way he did the growling and also the clean vocals was just amazing. And during their concert the clouds in the sky started breaking and sun came out making it even hotter for the festival audience.

After Amorphis it was time for Lost Society to take the smaller stage. Lost Society has been growing their audience year after year which made me wonder why they were playing on small stage. Regardless of everything the energy that band possess is endless. Last time I saw them live was in Tuska Festival 2013 so it’s been 5 years but they kept going like bunch of teenagers. Well they are still very young on their early 20’s so. There was one particular thing I paid attention to and having this constant critic sitting on my shoulder is sometimes a real pain in the ass but the frontman Samy Elbanna seemed to have picked up a lot of his interaction with the audience from Children Of Bodom frontman Alexi Laiho. There were lot of “motherfuckers and fucking” and the same in finnish and some sentences were half finnish and half english. As a critic it was bit bothering but as a fan it was how it should be. But regardless of everything this band keeps growing and growing and they are one of the most energetic livebands I have seen.

After Lost Society me and my friend made the biggest mistake on that day. We went to the VIP-area to eat and while we were enjoying our lunch we just watched the next band on main stage but not really focusing on it. But after few songs the band drew the attention from that delicious dish to the stage. “Holy shit this sounds awesome!” I said to my friend and we devoured the remaining of our dish and headed closer to the stage to watch. The band was Mustasch. Now this came totally behind the tree. For my shame I must admit I didn’t know this band very well. I knew the name and had heard couple of the songs they played but overall I didn’t know them. What a mistake! Although there were still many bands to come it was safe to say that Mustasch delivered the most entertaining set from all the bands. The frontman Ralf Gyllenhammar was such a character! “52 years and this ass is still rocking!” and he shook his ass to the crowd. He knew quite many finnish words which entertained the crowd even more. I was complitely blown away and I must admit that Mustasch have been playing quite a lot in my home since the festival. When they ended their gig Ralf all of a sudden came back to the stage to talk a bit more to the crowd and ended up unzipping his pants and shoving his towel on his privates and then threw the towel to the audience. I don’t know but something about him reminded me of Jouni Hynynen from Kotiteollisuus 😀

After Mustasch we met some friends and all of a sudden someone came to tell us that S-Tool who was starting on the small stage had a little accident. Apparently their bass player had some sort of medical emergency and was taken to a hospital, leaving the 4-piece band a 3-piece. They came on stage and explained the situation and simply asked from the crowd “Do you want us to play as a trio or should we just get the f out of here?” Crowd of course wanted to see them so they did their thing without the bass player and I really gotta give credit for that. I am sure the members were worried how their bandmate was doing and having one piece off from the rhytm section is a big piece and obviously you could hear it. But they are all more than professionals so they took it home and delivered the audience what they wanted to see.

So then it was walking back to the main stage area and there was pretty cool stage setup built for next band which was Accept. This was on my must-see list cause I haven’t seen Accept in god knows how long. I was also hoping they would play some older material as I was and still am complitely oblivious to their newer stuff. Well their setlist was almost like made for me. They played some golden classics like Restless & Wild, Princess Of The Dawn, Metal Heart, Up To The Limit, Balls To The Wall, Fast As A Shark and Midnight Mover to name a few. All in all I must say that the band performed extremely well. And when you consider the Peter Baltes (bass) is 60 and Wolf Hoffmann will turn 60 next year and the vocalist Mark Tornillo is 64 years old they really got their shit together. To do what those guys do there can’t be much sex, drugs and rock’n’roll. But crowd loved them and I was one of them.

Next up was Mokoma on small stage but we didn’t go there cause we wanted to get ready for the headliner of the evening. They started building the main stage for Helloween who have been touring on their Pumpkins United-tour for quite some time now. Some minutes before showtime “Let Me Entertain You” by Robbie Williams started playing and I knew from the previous Pumpkins United gig that it was getting close. They had a frontdrop so we couldn’t see the stage and when the first tunes of “Halloween” came out people simply lost their minds. And then…boom…frontdrop down and there they were…Michael Weikath, Kai Hansen, Michael Kiske, Andi Deris, Markus Grosskopf, Sascha Gerstner and behind the drums Dani Löble. Listening them play Halloween brought chills to my spine as it was one of my favourites on Keeper I album. I had seen their full set earlier and it lasted 3 hours I wondered how would they handle the 90 minutes that was their slot. Well lot of things were stripped out obviously, not just songs but also between songs animations etc. At times I felt Andi Deris kept speaking too much between songs and there were songs that definately should of been dropped from the setlist like Living Ain’t No Crime and If I Could Fly. Those were just not songs to play in 90 minute set.

As the set went on and on it became more and more evident why people were there. Both Kiske and Hansen got insane applause from the crowd everytime and when Hansen was playing his medley people were screaming their lungs out. The friend I was there with had never seen Kiske live and it was funny to watch his expressions. It was like he simply couldn’t believe that this bit chubby bald man could still sing like an angel. Well he is blessed with a voice like no other. That 90 minutes went by so fast and before we even realized they were playing I Want Out and those huge pumpkin balloons were thrown to the audience and the sky was full of confetti they shot from both sides of the stage. At this point I knew it was over and me and my friend started moving out from the area to avoid the worst traffic. While driving home we were listening Keeper I and II and we felt something we have missed was now fullfilled. It was a perfect day in South Park festival in Tampere, Finland.