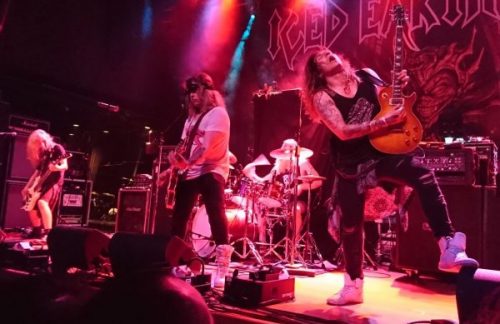 After nearly three hours on the road, I drove by a place where I saw a group of metalheads lined up against a building. That’s how I knew I had arrived. This night would be a tricky one because two tours were combined for the night –  the Iced Earth/Sanctuary/Kill Ritual tour and the Fozzy/Santa Cruz tour – all under one roof. Two bands for the price of one – awesome! Sadly for SANTA CRUZ though, this meant they had the opening slot at 6pm on a Friday night. Many people were not out of work yet or were still stuck on Friday night Southern Californian traffic but for these metalheads that were already in line, those day-to-day, minor nuisances were no match for their diehard spirit and devotion to witness a weekend ignited by Santa Cruz.

Once inside the venue, conversational whispers among the headbangers about the previous time(s) they had seen Santa Cruz roamed around the nine-hundred or so capacity House Of Blues. I overheard some people say they had seen the band in their previous North American tours, when they opened for SEBASTIAN BACH or AMARANTHE, but some people had seen the band in their hometown of Helsinki, Finland. I was one of those people. Though I had never seen the band in my own homeland, I had seen them enough times in theirs to know the type of show they put on. I will never forget the front row of teenage girls at Tavastia who would cry and scream for Archie Cruz or their ‘favourite’ guy in the band. I knew this kind of audience tonight would be different, so it was going to be interesting to see.

After a quick glance at the crowd, I noticed a big fluffy doggie in the audience. It was huge and really furry! I don’t know much about dogs, but maybe it was a Newfoundland or a Leonberger. I haven’t seen many pets at indoor venues, so maybe it was someone’s service dog? I was happy to see a variety of ages, band shirts, and even species in the audience that night!

Just a few minutes after 6, Santa Cruz kicked things off with their most recent anthem “Young Blood Rising”, a really good choice to get everyone pumped and let their weekday stress melt away. They continued with “My Remedy”, another heavy, catchy tune where the audience was already chanting the chorus along with the band. The crowd was already animated, so keeping a short set in mind, the band quickly continued with another new fast song, “River Phoenix”, from their latest album. To balance things out, things were slowed down a bit with “Drag Me Out Of The Darkness”, also from their new album ‘Bad Blood Rising’. This is the perfect song for audience singalongs and lighter/mobile phone waving (depending what generation you’re from).

After the slightly melancholic track, a very animated Archie Cruz introduced the next one, which would be another fan-favourite from their second album “We Are The Ones To Fall”. Quickly after this one came “Wasted & Wounded” which just so happens to be the next song after “We Are The Ones To Fall” on the album, so it was almost like listening to the album at home but with the band right in front of you. At one point I turned around and saw a pit going on behind me. The venue was almost filled at this point and everyone was moving. Even the fluffy pooch was in the pit. This was a first for me!

Like all great things in life, the Santa Cruz set was almost coming to an end. Archie, Johnny, Middy, and Taz once again thanked the audience and closed off the night with the very dynamic “Aiming High”, the only one performed off their debut album “Screaming For Adrenaline”. This was a great choice to leave the fans ready for the next bands of the night.

Overall, it was awesome seeing Santa Cruz live in San Diego. I wish they would have had a longer set but they made a great selection of songs considering the short set time. The songs performed were mostly from their second album, which was self-titled, and their latest album “Bad Blood Rising”.