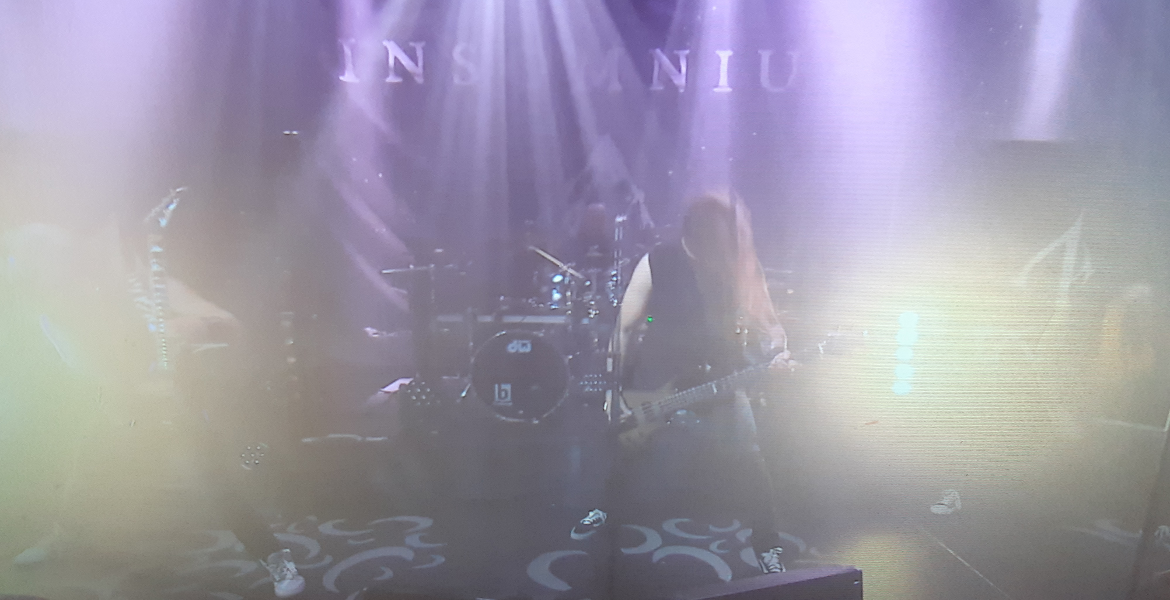 As advertised, Finland’s Insomnium were set to perform the entirety of Winter’s Gate to hundreds of fans online. Now, Insomnium has had a few brushes of bad luck, beginning with their ill-fated Heart Like a Grave North American tour, which was reduced to one date from their usual 30-odd dates (review is coming for that, promise!) I consider myself lucky for being able to catch that only US date, but that luck soon mellowed once I realized that Insomnium and mates Omnium Gatherum had suffered huge losses coming across the pond and having the rest of that tour cancelled.

Since then, both bands have tried to make up their losses through T-shirt sales and GoFundMe’s, which had a few missteps, and a few recent, fake links popping up with fake concerts, aimed to take money from susceptible fans.

I tuned in around 1pm my time, a nice quiet house, a nice quiet room, setting up the feed through my PlayStation (and they say nothing good comes out of video games, yes?). A nice relaxing bed, big screen TV, a cold brew, and let’s go!

Insomnium had promised their fans two different sets, one consisting of Winter’s Gate, and the second set consisting of older songs that they have not played in quite some time. Now, Winter’s Gate is one of my favorite albums, a novel written by Niilo Sevanen about Viking journeys of discovery, triumph, and ultimately tragedy, and I watched and listened with eager eyes and ears smiling and cheering through each track of this epic. I had caught Insomnium in the summer of 2018, in a small club where they had played through Winter’s Gate, and we danced, headbanged, moshed-I’m pretty sure someone threw me into the garage (you know, short, low center of gravity, hit me in the hip, I’m most likely going down), but that’s how concerts go, we mosh, we dance, we enjoy ourselves. Such a surreal experience to see the album in full live as opposed to having it through album speaker, Spotify, Tidal, or your music source of interest. To see Insomnium wearing their hearts on their sleeves on stage through Niilo’s love project, and seeing their smiles through it all, to see them just simply enjoying it, it’s a beautiful thing.

It was that much more beautiful seeing it live again through my TV, and although I wish I could be there in person, and how much I miss live concerts, I have to admit, it was pretty relaxing to lie back and just watch. I sang along, I screamed and cheered as if I was really there, and I’m sure my neighbors were looking into the window and wondering what kind of maniac they were living next to, but hey, I was having fun.

A well crafted tale of beauty, is what I would describe Winter’s Gate as. Of desperation, discovery, triumph and tragedy, each lyric, each note played with passion, and you could clearly see on their faces, how much the band loved being on stage, loved being together, and loved playing for all of us. What you expect is what you get with a band like Insomnium, one of the best in the game, from Niilo Sevanen’s monstrous growls,  Markus Vanhala’s wizardry with that guitar of his (yes, there’s a reason why fans call him VanHalen), solos after solos. To me, the real surprise was the beautiful clean vocals of Jani Liimatainen-I shouldn’t be surprised considering his roots in Sonata Arctica, but still, I think I stared at my screen in awe at his operatic range, especially with parts two and three. Ville Friman is missed onstage, but with Jani, I think they’ll be just fine.

Oh and we can’t forget drummer Markus Hirvonen’s Vans. Comfort within the pounding of those drums! If anyone had the best seat in the house, it was him-literally!

With all seriousness, I have often praised Insomnium as one of my favorites. It’s hard to pinpoint a list of top 5, top 10, etc, but in my best of top 3, they’re right there. Through the years, Insomnium has created top-notch doomy melodic death that pulled at my heartstrings, provided calming atmospheres on my nature walks, and inspired me to begin writing (mostly character introspections from my favorite games). Each time they came to my city, I always made time to go.

Which was why I was extra excited for their second set. Ever the big smiles, the band asked the crowd if they wanted more-of course we do! This set was special for me, and for many, I’m sure. While I miss seeing live concerts, one thing that I’ve enjoyed about these live streams is that the band is allowed to have creative freedom to play whatever songs they want, without the record label behind it (although I’m sure the record label had some hands in this, record label business isn’t my forte). This set, an old-school Insomnium set spanned from the first three albums, In the Halls of Awaiting, Since the Day it All Came Down and Above the Weeping World, would surely be a special one.

The set began with some light banter between the band and their fans, reading through the chat comments with big smiles, we were ready to start, and then the keys for The Gale began, a calming intro to the storm to come, racing right into Mortal Share. From then on, Insomnium played many classic tracks, many that surprised me, many tracks that I had not heard live before, and some that I have not heard on record in a long time-a joke that the band had pulled on Jani, playing through Daughter of the Moon, the first time Jani had claimed to ever heard that song.

That set was filled with many pleasant surprises, for Insomnium fans old and new. Tracks like Medeia (one of my favorite of Greek tragedies!), The Elder-and (well, I won’t spoil the rest) were an absolute treat and delight to hear, especially since I had been aching to hear Medeia live one day.

Having been listening to the band for a long time, it felt special to me, a celebration of their entire work, and for newer fans, a chance to dive into the beginning half of this discography. It left a big smile on my face, on their faces, and I’m sure all of yours.

An excellent show all around, and I was happy to have witnessed it, just as they have been happy to perform it.

A big thank you to Insomnium from all of us at Nordic Metal for putting on this amazing show, we’ll see you on the road soon!