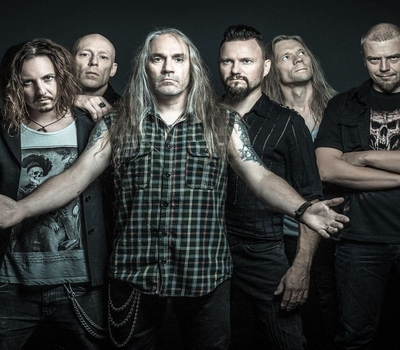 We had the time to have a small interview with Tommi Salmela from Tarot, Raskasta Joulua and Lazy Bonez about several topics. Will we ever get the chance to see Tarot in action again? What are Tommi musical tastes? What have been the best memories from Tommi’s career? Let’s find out…

How are you Tommi? Thank you for joining us on this interview!
Tommi: I’m fine thanks. Little tired , last night i was waching one series too late 🙂

Haha good to know, what series are you into?
Tommi: Lost in space. Did have to watch that till the end of first season

Cool. I’ve heard mixed comments about it, that’s on my list of series to watch! Looks like it was worth staying up until late watching it.
So, now starting our interview, let’s start talking about Lazy Bonez and Raskasta Joula:
We’ve seen you were performing at the John Smith Rock Festival for example and now there are upcoming dates with Raskasta Joulua. How do you deal with all this workload? How do you think your works are being perceived by the fans during these performances?
Tommi: I have been doing that for a long time. For me it’s not a problem cos i love to do that and it’s a mind relaxing thing to go up on stage and you know Raskasta Joulua is the tradition to calm down for the Christmas. To see all the nice band mates who are some kind of family to me. Lazy is the other one. Now we are doing our new album that comes to early next year. Of course fans understand those things.

Raskasta Joulua has been a huge success in Finland, for sure we know upcoming shows are going to be spectacular. What can the fans expect from this big family? Christmas is almost here, time flies, huh?
Tommi: Like i said it is the tradition and RJ is for fans tradition too. Many fans said that. I think we always try to do some new things like now there’s Glen Hughes and Dee Snider with us. It will be a blast 🙂

For sure will, what an amazing line up!
Now, let’s talk a little about some references I have regarding to the Q&A section in the Tarot site:
Back in 2003 you were asked this question:“Which album, along its tours, etc. brings out the best memories to you?”,  however, 2003 was a long time ago. Hence, has your answer changed since then?
Tommi: To me i like Crows fly Black. It is the first album where i sing as a full member of tarot. Best memories i recall was Crows over Germany and south America gigs at Brasil, Argentina.

I really like Crows Fly Black too, maybe my favorite Tarot album.
We’ve seen brazilian fans are crazy!
Now, a couple more questions regarding to this Q&A sections:
– Favorite song from Tarot?
– What is the work you are most proud of during your career?
Tommi: Favorite song is Ashes to the Star and I walk Forever. It’s hard to say what is the most that i’m proud of but i think that to get honor to play so many great musician like Marco, Zac, Janne, Pecu, Erkka, Mirka, JP, Tuomas, Vili, Erkki, Ville, Tony, Anthony, Kimmo, Floor, Tarja, Joe Lynn Jaakko, Topi, Mikko, and list goes on and on. I’m proud of cos i have privilege to play with them.

I agree with you, whoever has the opportunity to work with such talented people should consider himself very lucky!
Asking the final two questions from this Q&A reference, in order for us to know better who Tommi is…
– What are you listening to nowadays? Both Steve Perry’s singles were incredible, weren’t they?
– What is your favorite -currently active- metal band?
Tommi: I am an ordinary man from a little town called Kuopio. I Like to sing and my main job is helping youngsters with their problems in life. So I am an outreach youth worker who’s got a lovely wife and daughter. But I’m a musician too, who loves to sing and like all kind of music like, yes, Steve Perry, Van Halen Whitesnake, Strangeways, Uriah Heep, Deep Purple and so on.
Metal band i like Amorphis but hey there are a lot of great bands and many of them.

Amorphis is a great band, they are some cool guys as well.
Yes, luckily the metal scene is currently in good hands.

Now, changing a little our conversation here, next topic is about Tarot. It surely is something difficult to talk about since Pecu’s departure. Last year show at Kuopio with Turmion Kätilöt was so emotive and a very nice gesture to Pecu. How was this experience with the TK family?
Based on this event, is anything certain about Tarot from now on?
Tommi: Yes. You said it. It’s a hard question. There is so little time since that Pecu past away. So i think time will heal the pain. That show was yes emotional and i think now Pecu is inside our hearts to a lovely memory. But hey life goes on. Tarot may be doing something some day, but we all have to decide if we want to continue Tarot. TK family is great and that gig was a blast. It was fun.

Time will tell…
I think this makes it up for our interview Tommi. Any final words? We appreciate your time with us during this small talk! 🙂
Tommi: To everybody keep rock’n Roll . Life is too short to grieve and hurry-furry. Keep smile what ever comes front of you. Thanks for the interview!!