Interview with Mikko Kotamäki and Jaani Peuhu of Swallow the Sun

We caught up with Mikko Kotamäki and Jaani Peuhu of Swallow the Sun for a quick chat about the success of the new album When A Shadow Is Forced Into The Light, the new lineup, their own personal inspirations and their thoughts on Swallow the Sun’s current state and whats in store for the future.

I started off congratulating them on their recent placement on the Finnish album charts. When a Shadow is Forced into the Light placed first on the album charts the previous week. I asked how they felt and how they found out about the news. They both agreed it was really great to hear… Jaani told about his failed attempt to listen to the announcement on the radio… “I couldn’t find the right station in time! But then when I opened facebook I saw Mikko had posted about it.” Mikko went on to admit he had known about the news for a few days but was keeping it a secret from the guys.

Since their previous album Songs from the North was quite an ambitious work as a three album release, I asked if they felt intimidated or worried about the following album and how it would compare. Mikko explained that he was never worried, but that once the album started coming together he was more relieved that this album only required them to record nine songs (as opposed to the 21 on Songs from the North). Jaani also felt that this album was so strong on its own, that they didn’t feel the need to think of what kind of feedback there would be and were able to just enjoy the process. I mentioned “Lumina Aurea” was also quite a strong and unique release on its own, “Yeah that was a rough one”, Mikko exclaimed.

Since it has such a different feel from the actual album, I wondered if there was any other music written somewhere similar to “Lumina Aurea”, “No,” Mikko said “That EP is one of a kind, I don’t think we’ll be doing anything like that again.” Jaani went on to explain that although they are very different, “Lumina Aurea” and When A Shadow is Forced Into The Light belong together, kind of as opposites of a whole. “The album wouldn’t have felt the same without that EP before it, it was kind of like a relief, listening to the album after the EP.” Jaani said.

There is a prominent theme of nature within Swallow the Sun’s lyrics. On this album specifically, imagery forests and of water- lakes, rivers, etc. are prominent. I was curious if the guys had their own specific place in nature they had in mind when listening to the music. Mikko mentioned he does have a love for those kind of places, that he thinks of his parents summer cabin, which he visits every year, and is indeed in the middle of a forest by a lake. Jaani had a different perspective, that the lyrics on the album are so personal to Juha that he never really thought of a place for himself in relation to the lyrics.

Of course I had to ask about Mikko’s writing contribution to the album with “Clouds on your Side”. I was curious if the lyrics reminiscent of something from Trees of Eternity or Hallatar was intentional. He admitted he had never read their lyrics so it must be coincidence but that when Juha agreed to let him write the lyrics for the song, his one request was that Mikko not write anything about suicide or satan worshiping “Is that what he was expecting from you?” I asked jokingly, “Yes”, he chuckled, “so instead of that, I decided to write the song to him personally”. I went on to ask about the relevance of the French portion of the song. “I don’t speak french..” he started “me neither” Jaani chimed in. “That part is actually written by Aleah” Mikko continued, “Juha wanted to include that to the end of the song, but yeah, they’re not part of my lyrics”.

I asked how the album has been received in the US, specially since they have a US tour coming up. Mikko mentioned that it has been received well, that they’ve got a steady fanbase there these days, and still growing, which is why they have toured there so much. That they even toured more in the States with their previous album than in Europe.

We talked about the change in vocal style, that there is more clean singing on this album than previous albums. “I don’t think these songs need the growling. It would have sounded stupid to fill them with growling” Mikko said. Jaani added, “It sounds more natural with these songs, the clean singing, and when there are those growls you really feel them since they happen less, something special and interesting.” –“And now that this guy [Jaani] is in the band we have the chance to do a lot more with the vocals, with harmonizing and stuff”.

“Has the dynamic of the band changed at all with the new lineup?” I asked. “Well…”Mikko started, “I want to hear this too!” Jaani exclaimed. “Well, we have been more sober…” Mikko admitted “my drinking buddies have left the band so…”–“But the spirit has been really good” Jaani added, “I have toured with them a lot before and we get a long well”. I asked if playing live feels any different as well and Mikko mentioned they feel just the slightest bit more professional now with the new lineup.

I was curious if there were any covers the guys would like to do in the future, “Phill Colins?” Jaani blurted out. “I don’t know”, Mikko said “Cover songs are usually quite boring, its better to do your own music. There are only a few cover songs I like, such as Type -O-Negatives cover of ‘Black Sabbath’”. We went back and forth discussing different ideas of how one could do a cover song, is it better to choose songs that don’t matter as much to you or try to completely reinvent the song in your own style? “..but when you have such an amazing song writer in your band why would you bother with covers anyway?” Jaani concluded.

Check out the gig review and photo gallery here! 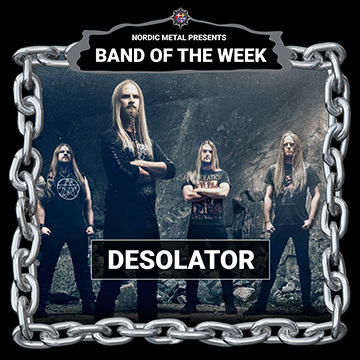