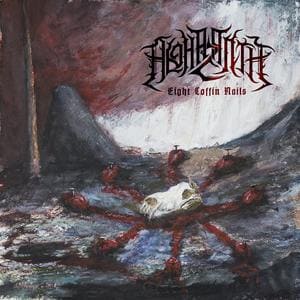 When I first found out about the release of Eight Coffin Nails, I did not know that it will be Alghazanth’s final album release. After listening to the entire album, that was an incredibly sad thought to keep in mind.

Listening to the album evoked a lot of feelings of despair, right from the beginning. The first track on the album Self-Exiled does a good job in setting the mood for what feels like a hug from the darkness itself. The music itself feels like it tells a story, every drum beat and strum of the guitar melting together in a pot of snow and evil.

Moving on to the second track, Facing the North, it starts to paint a new picture in my imagination of snowy forests and the northern lights, but these dreams are crushed instantly by the lyrics of a a ritual of evil. A beautiful melody will make you feel like the shedding of blood and setting of fires is your only path to salvation.

Further on on this album, you will find The Upright Road. This is by far my favourite track on the entire album. A soothing melody with haunting vocals and such a melancholic symphonic feeling that it gives me goosebumps.

Another highlight of evilness to me is At Their Table. This song reminds me more of classic Black Metal. Simple melodies, efficient drumming and vocals that suites it perfectly.

Listening to the rest of the album just reminds me so much more that music like this is not something that you can describe. It truly is a feeling… It is something deeper than just the haunting vocals, the melodies, the drum beats. It is a combination of that – and more. It is a spiritual and emotional journey through dark plains and of introspection. This fact is solidified by listening to Pohjoinen, an incredible instrumental piece on this album.

The album closes with To Flames the Flesh, the slow and dark final page in the book of Alghazanth’s final chapter.

This album, I can say with honesty, is a masterpiece. It is always sad to me to see brilliant musicians like this put out their final album together as a band. This however, is going out on a high note.

What a worthy ending for a majestic group of musicians such as Alghazanth. This album is well worth the listen, and worth dwelling on the fact that it is their final release.