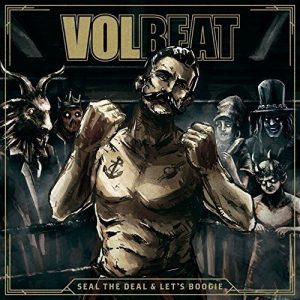 Seal the Deal & Let’s Boogie is the sixth studio album by Danish heavy metal band Volbeat. The album was released on 3 June 2016. It is the first album not to feature Anders Kjølholm who left in November the previous year.

In April 2015, singer Michael Poulsen revealed that he had so far written seven songs for the album. In November 2015 it was reported that bassist Anders Kjølholm had left the band. According to Poulsen the band sat down and talked about the coming year and “there were some things that we couldn’t agree on”, adding “there was no big drama”. Kaspar Boye Larsen was announced as the replacement for Kjølholm in May 2016, after having played bass for Volbeat on their recent US tour. Larsen had known Michael Poulsen and drummer Jon Larsen since the early 1990s, and replaced Anders Kjølholm on Volbeat‘s first European tour in 2006.

On 7 April 2016 Volbeat announced the release of Seal the Deal & Let’s Boogie. Lead guitarist Rob Caggiano said of the musical content of the album: “There’s definitely some stuff that kind of weaves in and out of the record. You know, the last album was leaning heavily towards like the Western stuff and, you know, outlaws and cowboys and that kind of thing, and this is a whole different thing. There’s definitely some cool characters and some voodoo stuff on this record, which I always found fascinating.” Lead singer Michael Poulsen stated that he believes in the spirit world, saying: “I’ve always been very interested in the spiritual world and all those kinds of things. Also dark, spiritual things… I guess it’s just something that a lot of guys in the metal and rock scene are very into. I just remember very interested in it since I was a teenager, seeing a lot of horror movies, which I still do.” Poulsen has also called the album a “spiritual album, because the lyrics are very spiritual. They’re not religious; we’re not religious believers, but we do believe in the spirit world.”

Musically, the album is more melodic and less heavy metal-sounding than previous albums, with Michael Poulsen admitting “it seems to be more of a rock album”. For the first time Volbeat are using female backing vocals on several songs by singer Mia Maja, and “Goodbye Forever” features the Harlem Gospel Choir. Poulsen has said he is the most proud of the album’s choruses, which he has called “the strongest I’ve ever done”. Singer Danko Jones features on the song “Black Rose”, who Poulsen had stayed in touch with since he first met him when Jones‘ band played a concert in Copenhagen in 2006.

“The Devil’s Bleeding Crown” was released as the album’s first single in North America on 7 April 2016. The single peaked at number one on Billboard’s Mainstream Rock Songs chart in the United States.

Internationally, “For Evigt” (meaning “Forever”) was released as the first single on 29 April 2016. The song features Danish singer Johan Olsen of rock group Magtens Korridorer, and is the second collaboration between Olsen and Volbeat following “The Garden’s Tale” (2007). “For Evigt” is replaced by “The Bliss” on the North American version, where the Danish chorus sung by Olsen is sung by Michael Poulsen in English.

On 5 September 2016, “Let It Burn” was released as the album’s third international single.

“Black Rose” was released as the third single in North America, where it was sent to active rock radio stations in the US on 7 March 2017. The song peaked at number one on the Billboard Mainstream Rock Songs chart in the US, becoming Volbeat‘s sixth number-one single on the chart.