Rock the Rebel/Metal the Devil

Tracks on Rock the Rebel/Metal the Devil

Rock the Rebel/Metal the Devil is the second studio album by Danish heavy metal band Volbeat, released in 2007. The album debuted at #1 on the Danish Albums chart in 2007, making it Volbeat’s first album to do so.

The song “Mr. # Mrs. Ness” continues the story of Danny & Lucy, which began on the bands debut album with the tracks “Fire Song” and “Danny & Lucy (11 PM)”. This story is continued on Volbeat’s next album, Guitar Gangsters & Cadillac Blood with the song “Mary Ann’s Place” and is concluded on the band’s newest album, Seal The Deal & Let’s Boogie, with the song “You Will Know”.

The track “The Garden’s Tale” was released as a single in Denmark and proved to be a surprise hit for the band in their home country, staying on the Danish Charts for 18 straight weeks and peaking at #18. The music video for the song was also put into heavy rotation on MTV Denmark. Music Videos were also produced for the songs “Sad Man’s Tongue” and “Radio Girl”, but whether or not they were ever released as radio singles is unclear. 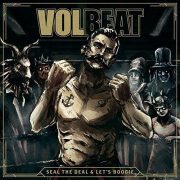