Tracks on Beyond Hell/Above Heaven

Beyond Hell / Above Heaven is the fourth studio album by Danish heavy metal band Volbeat. The album was released on September 10, 2010 on EMI in Denmark, on Vertigo in the rest of Europe, and on Republic in the United States.

The title refers to the overall theme of the album, continuing the storyline of Guitar Gangsters & Cadillac Blood. This was the first Volbeat album to chart on the Billboard 200, and was certified Gold by the RIAA on March 22, 2016.

The album, Beyond Hell/Above Heaven was released on 10 September 2010.

Michael Poulsen explained the title of the album stating

“…it’s a way telling people that we don’t belong or believe in neither heaven nor hell. So if we go beyond hell, we will make heaven look like hell, and if we go above heaven, we will make hell look like heaven. Heaven and hell is something we create in our minds and personal self-created demons come out of that.”

Featured on the album is previously released track, “A Warrior’s Call”, which was made for Danish boxer Mikkel Kessler. The track Evelyn contains some death grunts provided by Mark “Barney” Greenway (Napalm Death), which was a whole new element on Volbeat’s music, making a groove metal style.

Michael Poulsen has also revealed several of the guest musicians on the album stating “I’m very very proud to have these fine gentlemen with me, since they inspired me a lot for a long time.” 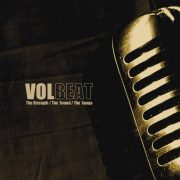