How Far to Asgaard

Bands > Týr > How Far to Asgaard

Tracks on How Far to Asgaard

How Far to Asgaard is the first full-length album by the Faroese Heavy Metal band Týr. It was released in January 2002 by Tutl Records.

“Ormurin Langi” is a metal version of the traditional Faroese song. A video for the song was also recorded in Iceland.

The song “How Far to Asgaard” is 8:59 in length, followed by 9:50 of silence. At 18:49 there is the Faroese poem “Nornagest Ríma” chanted by a group and accompanied by rhythmic stamping.

The Russian release of the album is issued by СД-Максимум (CD-Maximum) under license from Tutl Records. The 9:50 of silence on the track, “How Far to Asgaard” is shortened to just 0:51. This version also contains the video for “Hail to the Hammer.” The album art on this version is an obvious remake of the original.

The album was re-released on October 2, 2008 by Napalm Records with a new cover artwork and two additional tracks originally from the single Ólavur Riddararós released in 2002. In the re-released version, the poem “Nornagest Ríma”is used as a bonus track after the song “Stýrisvølurin”, instead of “How Far to Asgaard”. “Stýrisvølurin” ends at 6:42, and is followed by 2 minutes, 52 seconds of silence, until “Nornagest Ríma” starts at 9:34. 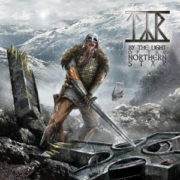