1: Veterans Of The Apocalypse

8: Days Of Our Lives

“Apocalypse Again” is power metal band THUNDERSTONE‘s sixth studio album. It was released on April 1, 2016 via AFM Records.
The album debuted in the fifth place in the official Finnish chart, and remained on the list for a total of four weeks.

It is not only the return of the band after almost six years, “Apocalypse Again” sees original vocalist Pasi Rantanen re-unite with THUNDERSTONE. 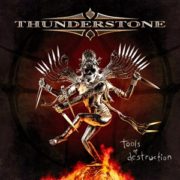