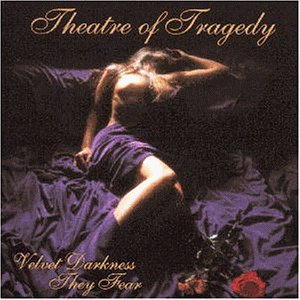 Tracks on Velvet Darkness They Fear

1. Velvet Darkness They Fear
2. Fair and ‘Guiling Copesmate Death
3. Bring Forth Ye Shadow
4. Seraphic Deviltry
5. And When He Falleth
6. Der Tanz der Schatten
7. Black as the Devil Painteth
8. On Whom the Moon Doth Shine
9. The Masquerader and Phoenix

Velvet Darkness They Fear is the second studio album by the Norwegian gothic metal band Theatre of Tragedy. It was released in 1996 by Massacre Records. The album was issued in the US by Century Media Records in 1997.

Velvet Darkness They Fear continued Theatre of Tragedy’s particular brand of gothic metal, first heard in their first album, Theatre of Tragedy, defined by alternating and occasionally overlapping male death grunts and sung female vocals. This style, which was copied later by many metal bands, is generally known as ‘Beauty and the Beast’.

Velvet Darkness They Fear also continued the use of Raymond Rohonyi’s Early Modern English lyrics. “Der Tanz der Schatten“, which is written in German, is the exception. The songs themselves rarely have a clear story, but death, undeath, demons and similar supernatural elements are all prominent. The lyrics to the songs are referred to within the sleeve notes as ‘plays’, ‘poems’ and one ‘soliloquy’, depending on the parts the singers play.

The fifth track, “And When He Falleth“, includes a section of Jane Asher and Vincent Price’s dialogue from the film The Masque of the Red Death.

Albums by Theatre Of Tragedy