2: Beauty And The Beast

8: Know Why The Nightingale Sings?

10: Once Upon A Troubadour

Angels Fall First is the debut studio album by Finnish symphonic metal band Nightwish. The original 500-copies limited edition features seven tracks, two of which are not on the regular edition. This edition is highly sought after by collectors and in 2012 a copy was sold for $1137.23 on eBay. The album was released in the US by Century Media in March 2001.

It came about in August 1996, around a campfire. We were at my summer cabin, a bunch of friends camping out, barbecuing, singing songs. Then it just hit me that I wanted to start a band. But we were too far ambitious at that time for it to remain simply acoustic and making music with just acoustic guitar, keyboards and female voice, was just a bit boring, and we naturally started heading in a heavier direction. The funny thing about Angels Fall First is that it was only supposed to be a demo to send out to record labels. But then Spinefarm heard it and thought it was perfect, so they put it out as it was with no remixing or anything. I used to be a bit embarrassed but now I can feel proud and nostalgic about those songs.
The original pressing featured Holopainen’s home contact address, an accident from reprinting the demo sleeve for the album.

The songs of the album were played more and more seldom live leading up to the departure of vocalist Tarja Turunen in October 2005. No songs from the album have been performed with vocalists Anette Olzon or Floor Jansen.

The male vocals heard on “Beauty and the Beast”, “The Carpenter”, “Astral Romance” and “Once Upon a Troubadour” are sung by keyboardist–band leader Tuomas Holopainen, as well as the whispers in the beginning of the demo version of “Etiäinen”. Following this release, Holopainen never sang credited on an album again, because he thought that he was not good enough.

The band, and especially band leader and keyboardist Tuomas Holopainen has frowned upon the album, considering it essentially an extended demo. In a 2011 interview, when asked what album other than Imaginaerum Holopainen wanted to make into a movie, he replied that it would be Angels Fall First, and that it would be “a black-and-white comedy”. 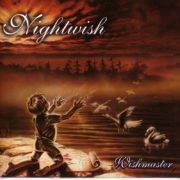