Whoracle is the third album by Swedish melodic death metal band In Flames. The album was released through Nuclear Blast on 27 October 1997. Apart from “Everything Counts”, which is a cover of a Depeche Mode song, all songs were composed and arranged by In Flames. The lyrics were translated by Dark Tranquillity guitarist Niklas Sundin, after Anders Fridén had written them in Swedish. Whoracle is the final album to have Johan Larsson & Glenn Ljungström. 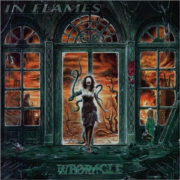