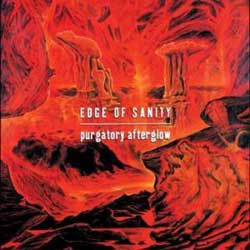 Purgatory Afterglow is the fourth full-length studio album by Swedish death metal band Edge of Sanity. The album was recorded by Dan Swanö in Unisound Studios, Örebro, Sweden, in July 1994 and released in 1994 by Black Mark Production. Purgatory Afterglow is dedicated to the loving memory of Kurt Cobain. There are two different versions to the disc; the mirror-like disc with black letters and the black disc with gold letters. The Japanese release features the tracks “Until Eternity Ends” and “Eternal Eclipse” from the Until Eternity Ends EP. One of the two only Edge of Sanity videos was made for the song “Black Tears” (the other video was done for “Uncontrol Me” from the Cryptic album). This song was covered by the bands Eternal Tears of Sorrow, on their album Chaotic Beauty, and Heaven Shall Burn, on their album Iconoclast (Part 1: The Final Resistance).