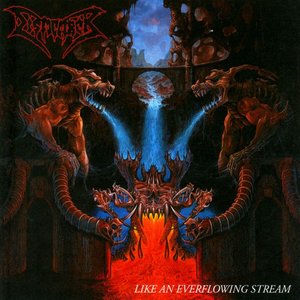 Like an Ever Flowing Stream is the debut album by Swedish death metal band Dismember, released in May 1991. The title may refer to the Biblical Book of Amos 5:24, “Let justice roll down like waters, and righteousness like an ever-flowing stream” (New International Version). A music video was made for the track “Soon to Be Dead”. Since Karmageddon Records owns the rights to the album, it wasn’t re-issued as a digipack disc in 2005 like every other album (except for Where Ironcrosses Grow). Regain re-issued those digipack versions and also remastered the albums while Karmageddon released an exact copy of the 1996 issue by Nuclear Blast (except for two additional bonus tracks). Nicke Andersson, at the time the drummer in Entombed played all the lead guitars except for the guitar solo on “Override of the Overture”, which is played by David Blomqvist. In 2010, the album was inducted into Decibel Magazine’s Hall of Fame.