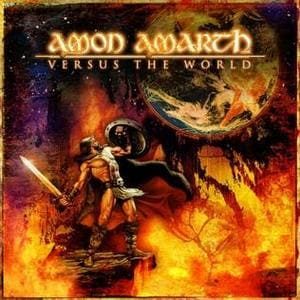 1. Death in Fire
2. For the Stabwounds in Our Backs
3. Where Silent Gods Stand Guard
4. Versus the World
5. Across the Rainbow Bridge
6. Down the Slopes of Death
7. Thousand Years of Oppression
8. Bloodshed
9. …And Soon the World Will Cease to Be

Versus the World is the fourth full-length studio album by the Swedish death metal band Amon Amarth, released on November 18, 2002 by Metal Blade Records. It was also released with a bonus disc featuring the Sorrow Throughout the Nine Worlds EP as well as their two demos; Thor Arise, The Arrival of the Fimbul Winter (the first being unreleased before) and a German version of “Victorious March” entitled “Siegreicher Marsch” which was on Once Sent from the Golden Hall. The song “Death in Fire” was made into a music video. Versus the World was the first Amon Amarth album to showcase a more midpaced and heavy sound, unlike their earlier faster works. A deluxe edition was released in 2009 that featured the album remastered by Jens Bogren, and a bonus cd of the original album played live in its entirety in Bochum, Germany.