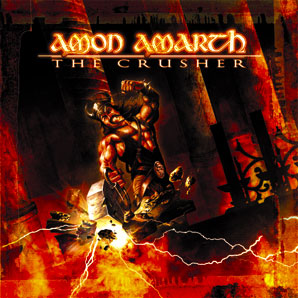 1. Bastards of a Lying Breed
2. Masters of War
3. The Sound of Eight Hooves
4. Risen from the Sea (2000)
5. As Long as the Raven Flies
6. A Fury Divine
7. Annihilation of Hammerfest
8. The Fall Through Ginnungagap
9. Releasing Surtur’s Fire

The Crusher is the third full-length studio album by Swedish death metal band Amon Amarth. It was released on May 8, 2001, through Metal Blade Records. The album was also released on the Double LP and Picture LP versions on June 29, 2007, which were hand-counted and limited to only 500 copies. A deluxe edition was released in 2009 that featured the album remastered by Jens Bogren, and a bonus CD of the original album played live in its entirety in Bochum, Germany.